What the Pandemic can Teach us about Political Philosophy Eighteen months after COVID reached Europe, we can begin to reflect on the ethical dimensions of the pandemic. Aveek Bhattacharya (Social Market Foundation) and Fay Niker (University of Stirling), co-editor of a new book, Political Philosophy in a Pandemic: Routes to a More Just Future, introduce some of its ideas.

Back in April 2020, in the period we now look back on as “the first lockdown”, we gathered together some early reflections from philosophers and political theorists on the ethical dimensions of the developing COVID-19 pandemic. We published these on Justice Everywhere, the blog we help to run. Experts from almost every academic field – epidemiology, statistical modelling, social psychology, economics – were turning the tools of their trades to the growing crisis. What, if anything, did we and our peers have to offer?

More than enough, happily, to develop those early reflections into a book, Political Philosophy in a Pandemic: Routes to a More Just Future, an edited collection of essays examining how COVID-19 has affected a range of things we value – equality, justice, democracy and social progress. Though almost a year and a half has elapsed since we first embarked on the project, the book is being released at a particularly apposite moment for such discussions. Clearly, being essays in ethics and political theory, most of the contributions have little to say on how to deal with the immediate emergency or how best to beat back the virus. Instead, most of our authors wanted to connect COVID-19 backwards and forwards in time. One refrain running through the book is the idea that although the pandemic itself is unprecedented, many of the issues it has raised link to long-running questions of justice and political contestation. Another is the impulse to draw on these moral ideas and political debates to try to create a better society as we attempt to overcome the current crisis and to envisage the world beyond it. 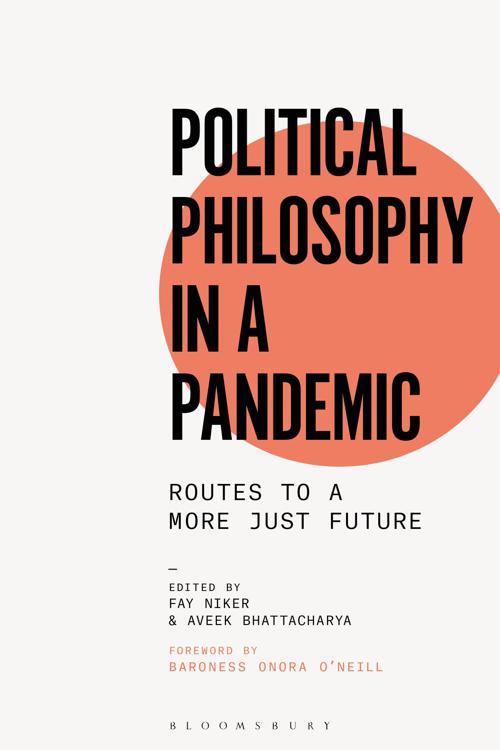 It is common to note that crisis and opportunity often go together. There is something a little uncomfortable about this idea, in one sense. This discomfort comes perhaps from the idea that we shouldn’t be thinking about the opportunities that a crisis like the COVID-19 pandemic offers; something about this forward-looking orientation seems not to pay due attention to the human tragedy currently being lived through. And this can certainly be the case when it comes to certain kinds of opportunism. For example, Naomi Klein opens her book The Shock Doctrine (2008) by describing how entrepreneurs viewed the devastation wrought by Hurricane Katrina in 2005 as an opportunity for property development and remaking the city’s school system. There is clearly a different attitude motivating the “build back better” impulse, which has animated efforts across societies at framing what the pandemic recovery should involve and what our post-pandemic world should look like.

The dramatic rupture to “business as usual” that crises produce opens up space for collective reflection, political contestation and policy change for at least the following two reasons. First, in dramatically disrupting the status quo, crises invite us – individually and collectively – to take stock, to reflect on and assess our existing situation. By exposing our vulnerabilities and highlighting deep social problems (often through exacerbating them), they summon us to consider how to redress, repair and rebuild our societies. Second, crises require that we take drastic steps. Such actions either remind us or demonstrate to us what we are capable of and what is politically possible. By showing that other worlds are possible, crises can inject more agency back into political discourse simply because it’s much more difficult for politicians to mobilise a sense of inevitability around the status quo.

Clearly, the pandemic has these two features. First, the virus has picked at societal wounds, opening them for all to see. As many of the chapters in our collection detail, several forms of injustice that predated the crisis have contributed to the damage caused by the virus, been worsened by it, or both – for example, educational inequalities, intergenerational inequity, and inadequacy of housing. And it has also increased the spotlight on other ethical and political questions, such as how to address the problem of misinformation and disinformation being proliferated on social media.

Second, we have seen fundamental changes and monumental achievements that could barely have been envisaged pre-pandemic. Individuals have made significant sacrifices and dramatically altered their behaviour – including consuming less, travelling less, working from home, homeschooling their children, and not seeing friends and family members for months, even on their deathbeds. At a societal level, we have seen an outpouring of solidarity and appreciation for ‘key workers’ previously taken for granted. And governments have quickly produced bold and far-reaching policies, on a scale rarely seen outside of wartime, to guarantee economic security and temporarily end homelessness. A natural question, explored in a number of chapters, is whether these positive trends will continue beyond the crisis. And if not, why not – since we have already seen what is achievable?

The contributions to Political Philosophy in a Pandemic explore the relationship between crisis and opportunity in an effort to set out routes to a more just world after COVID-19. In so doing, the book examines a set of distinctively political-philosophical issues raised by the crisis. Some of these are obvious (e.g., the issue of what to do about elections scheduled during a pandemic); some are less obvious, but not necessarily any less important for that (e.g., how public health measures undermine our democratic culture). So, while the book touches upon important issues in medical and public health ethics, it is primarily a collection of essays in political theory.

It is comprised of five parts, each picking out a major theme in the social and political fallout of the pandemic. The first is social welfare and vulnerability, which includes essays on the social determinants of health and the corrosive nature of disadvantage, the vulnerability of children during school closures, and the right to adequate housing. The second theme is economic justice and includes discussions of precarity, universal basic income, and intergenerational justice. The third part discusses questions relating to democratic relations, such as the two mentioned above – whether and how we should hold elections during a pandemic and the pandemic’s effects on the democratic way of life – and others relating to the discriminatory assumptions underlying lockdown measures and whose voices should (and should not) count in legitimating pandemic-responsive policy. The fourth theme is speech and (mis)information, which examines issues such as whether efforts to repress misinformation about COVID-19 on social media violate freedom of speech and the moral permissibility of shaming those who flout social distancing guidelines. Lastly, the essays in the fifth part examine the relationship between crisis and justice, including essays on the pandemic as an experiment in egalitarian living for the middle-classes and on the lessons that we might take from the COVID-19 crises for climate justice. This focus on the political-theoretical questions makes this book a valuable complement to other, vital collections that have concentrated on questions of public health ethics.

The essays in Political Philosophy in a Pandemic are academically rigorous but accessibly written, and so we hope that they’ll be interesting not only to academic political theorists, but also to students (e.g., of politics, philosophy, public policy) and to anyone with a general interest in the questions we raise. Our volume does not make any claim to comprehensiveness in its coverage of the moral and political philosophy of the pandemic, despite the wide range of pressing and interesting topics included. As Onora O’Neill notes in her Foreword, the essays were written “mid-pandemic”, most before we went into the second lockdown in the UK. Even now, in September 2021, with COVID-19 apparently receding in Europe and North America, considerable uncertainty remains due to the slow rate of vaccination in some parts of the world and the continuing threat of new variants. Even where the virus itself appears to be under control, the hard work of rebuilding is only now beginning. Thus, this collection is offered as the start of a crucial and ongoing conversation.

This first appeared on the LSE's COVID-19 blog. This post represents the views of the authors and not those of the COVID-19 blog, nor LSE. It is adapted from the introduction to the book Political Philosophy in a Pandemic: Routes to a More Just Future. You can buy the eBook or pre-order a physical copy here.

The Suez Logjam added Fuel to Transport Disruption. What Next?

The Appropriated Body: Biometrics Regime, The Digital State and Healthcare in Contemporary India