An Artistic Impression of Information Warfare Jessica ‘Zhanna’ Malekos Smith explores what we mean when we talk of 'information warfare'.

In preparing to write a book, George Orwell’s guiding philosophy was to write because “there is some lie that I want to expose, some fact to which I want to draw attention, and my initial concern is to get a hearing.”

In that same spirit, this article seeks a hearing to expose common misperceptions about information warfare to encourage civic awareness.

First, what is Information Warfare?

Other than being a hotly contested term with many competing definitions within the field of military science, it is essentially: The military art of using information to deliberately mislead an adversary and influence their decision making for a strategic purpose.

The U.S. Federal Government has not officially defined information warfare. Instead, the government uses the term information operations. These operations are defined under the Department of Defense’s Joint-Publication 3-13 as “[t]he integrated employment, during military operations, of information-related capabilities in concert with other lines of operation to influence, disrupt, corrupt, or usurp the decision-making of adversaries and potential adversaries while protecting our own.” Information operations serve a variety of purposes such as preserving the element of surprise in a military operation, or protecting information about one’s forces and capabilities. It’s comprised of five central pillars: (1) computer network operations, which are guided under Department of Defense Joint-Publication 3-12, Cyberspace Operations; (2) psychological operations, (3) electronic warfare, (4) operations security, and (5) military deception.

As former director of the Central Intelligence Agency, Michael V. Hayden wrote in his memoir, The Assault on Intelligence, “the central fact to be faced and understood here is that the Russians have gotten very good indeed at invading and often dominating the American information space.” An examination of recent events are a testament to this: Beginning in February 2018, the U.S. Justice Department began issuing indictments against Russian nationals and several Russian companies for engaging in “information warfare,” with the intent to “interfere with U.S. political and electoral processes, including the 2016 U.S. presidential election.”

In New Knowledge’s report to the U.S. Senate Select Committee on Intelligence, Russia’s interference came in three waves. First, attempting to access online voting systems. Second, hacking into the Democratic National Committee’s networks and releasing information about the Clinton campaign through online fake identities and Wikileaks; and third, conducting an elaborate information warfare campaign to exploit social tensions in the U.S. to influence voters. According to Oxford University’s Computation Propaganda Research Project, more than 30 million American social media users, “shared the IRA’s Facebook and Instagram posts with their friends and family, liking, reacting to, and commenting on them along the way” between 2015 and 2017. The Department of Justice’s 2019 Report by Special Counsel Robert S. Mueller, also elucidated how the Russian state-sponsored Internet Research Agency served as the central conduit for disseminating propaganda and disinformation.

But What is Disinformation?

To the second point, disinformation is neither a stand-alone doctrine, nor a synonym for misinformation.

Unfortunately, some prominent U.S. public figures are conflating these terms when addressing the public. Most notable is Senator Mark Warner (D-VA), the Vice Chairman of the Senate Intelligence Committee. In Senator Warner’s recent speech at Federal Election Commission, he created his own befuddling term of “misinformation, disinformation.” Senator Warner said: “I worry at times we may be spending too much time [and] resources on 20th century stuff when increasingly conflict in the 21st century will be cyber, will be misinformation, disinformation.”

According to the Congressional Research Service, the U.S.’ Congress’ policy think-tank, misinformation is “the spreading of unintentionally false information. Examples include Internet trolls who spread unfounded conspiracy theories or web hoaxes through social media, believing them to be true.”

In contrast, disinformation is defined as intentionally false information. The CRS offers several example here of "planting false news stories in the media and tampering with private and/or classified communications before their widespread release.” The CRS’ report elucidates that disinformation is not a stand-alone doctrine as Senator Warner suggests, but one type of deception technique employed amongst several in information warfare.

Looking at this deception technique from an eastern perspective, according to Russian military expert, Timothy Thomas the purpose of disinformation is to “manipulate perceptions and information and misinform people or groups of people. Some disinformation procedures are obvious, some are unconvincing, and others work through delayed perceptions, rumors, repetition, or arguments. Specific persons or particular social groups can serve as disinformation targets. The purpose of a disinformation campaign is to influence the consciousness and minds of people.”  It is worth noting the differences between eastern and western thinking on disinformation in order to understand how to mitigate these persistent threats.  Precision of concept ultimately helps guide precision of thought in crafting policy recommendations. 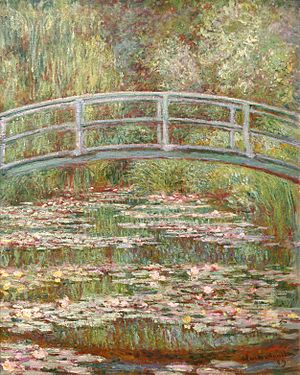 With all due respect to the great master painters, understanding the essence of information warfare is rather like looking at an impressionist painting.

Granted, the creative muse in Impressionism yields exquisite optical experiences to admire, whereas in information warfare, there is a malicious intent to deceive an opponent. Both are alike, however, in their techniques of creating impressions of modern life. Impressionism uses short brush strokes to present an illusion of the real-form object or person, as opposed to creating a fully detailed, finished work. Interestingly, the term ‘Impressionism’ was originally served as an insult for painters whose work had a “unfinished, sketch-like appearance.” The French art critic Edmond Duranty, however, praised the Impressionism art movement for conveying the “reality of the street” – our daily lives – in a novel way that viewers could readily identify with and recognize.

Juxtaposing information warfare with impressionist art helps imparts this takeaway: Like the layers of artifice that are blended in information warfare to exploit the viewer’s perception of the reality of the street, the Impressionists’ style of painting is an aesthetically pleasing amalgamation of vibrant colors and forms to create an optical impression of reality. Regardless of whether the subject is a person, object, or landscape. A classic example of an Impressionist painting is Claude Monet’s Bridge Over a Pond of Water Lilies (1899).

Point being, to properly view ‘information art’ we need to step back from the center image to allow the optical illusion to come into focus before our eyes, but also recognize that our vision of it will never be crystal clear. That’s not the style of this art.

J. Zhanna Malekos Smith, J.D., served as a captain in the U.S. Air Force Judge Advocate General’s Corps and has held fellowships with Duke University Law School as the Everett Cyber Scholar, the Belfer Center’s Cyber Security Project at the Harvard Kennedy School, and Madeleine K. Albright Institute for Global Affairs. Her research has appeared in The Hill, Defense One, and The National Interest, among others. She holds a J.D. from the University of California, Davis School of Law; M.A. from King’s College London, Department of War Studies; and B.A. from Wellesley College.

A Post-Coronial World: A Decolonised Future for Global Development

Prime Minister Abiy Deserves the Nobel Prize, but can he Keep the Peace?

Shrouded in Secrecy: International Relations according to Carson, Berman and Lake The May 2020 issue of Global Policy has a special section on 'Enhancing Europe's Global Power' edited by Helmut Anheier, Christoph Abels, Iain Begg and Kevin Featherstone.