The Changing Face of Aid The World Bank just released a monster number crunch on the changing face of aid. ‘A Changing Landscape: Trends in official financial flows and the aid architecture’ covers ‘all private and public sector financing to developing countries’ up to the end of 2019 (aka the eve of the pandemic). 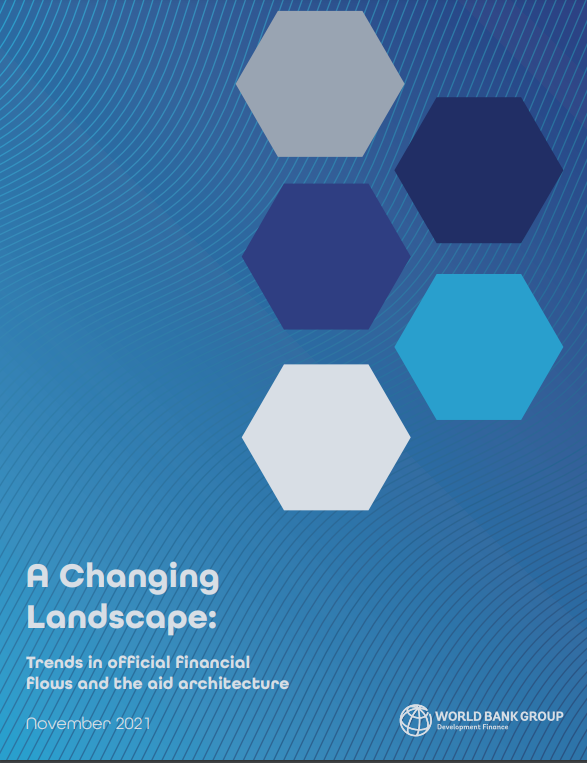 Here are the main findings, with my attempts at a commentary + translation in italics:

Amazing that official aid grew at all, given the austerity going on in the rich countries. What’s happened to private flows under Covid? Nothing good, I imagine. Also, is it not possible to include remittances in the mix?

To a large extent, I assume, ‘BRICS’ = ‘China’. Impressively massive hole in the data on grants, but what I’ve read largely suggests BRICS prefer loans to grants anyway – more lend-scape than landscape.

So much for aid’s poverty focus……

The volume of funding which donors have not identified as allocated to specific recipient countries almost quadrupled over the past two decades and now constitutes more than a fifth of official finance to developing countries. The rising share of resources not assigned to specific recipients indicates a growing focus on global and regional public goods and on support for emergencies (humanitarian aid and support to refugees in donor countries).

Interesting shift to global public goods, which I imagine is only going to increase via aspects of the climate crisis + Covid response.

Aid concessionality varied significantly across sectors, with grants deployed mostly for social sectors and support for emergencies, and concessional and non-concessional loans favored for infrastructure. More than two thirds of ODA grant commitments in the past five years were made in the social sectors and in support for emergencies. In contrast, 44 and 43 percent of ODA loans and OOF, respectively, were used for infrastructure investments.

So it’s grants for stuff like disasters, health and education, loans for bridges and roads. Makes sense.

Interesting, so yes, aid is getting increasingly fragmented, but not primarily because of new donor countries (Turkey, Saudis etc). The real problem is the proliferation of new agencies in existing donors.

Development activities remain highly fragmented; the average size of official finance activities has decreased by approximately one third in value in twenty years. Fragmentation appears to be mostly concentrated in social sectors and in bilateral activities. The impact on ODA grants, the dominant type of official flows, was particularly strong. The average size of an ODA grant decreased from US$1.5 million in 2000 to US$0.8 million today.

Typical aid grants have halved since 2020 (but there are a lot more of them, so aid continued to rise). Is that a problem? Yes if it means lots more form-filling, no if it means a wider range of recipients and smaller grants more attuned to local need. Discuss.

This first appeared on Duncan's From Poverty to Power blog and was reposted with permission.

Chomsky and Pollin: We Can’t Rely on Private Sector for Necessary Climate Action

Taliban 2.0: Fears and Questions Looming over Internet Access for Millions of Afghans